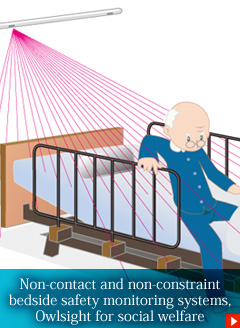 Monitoring systems warn when patients are in a dangerous position or when then try to leave the bed.
Sales in progress 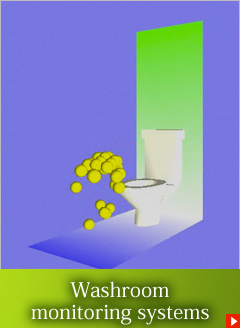 Washroom monitoring systems detect and report abnormal incidents in an enclosed room where privacy is important.
Under development 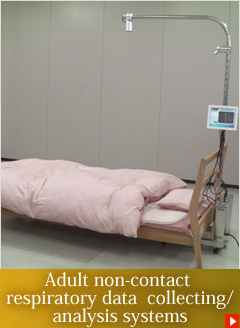 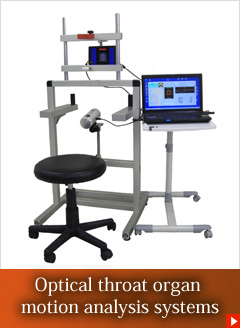 2015.10.30 We started to market non-contact and non-constraint bedside safety monitoring systems, Owlsight for social welfare. Please refer to the news release for the details of the product.

2015.9.28 We will exhibit our non-contact respiratory motion measurement system for adults at the 19th Japanese Telemedicine and Telecare Association conference (Sendai city, October 9~10)

2015.9.28 We will exhibit our non-contact products such as Owlsight, a bedside safety monitoring system for people with dementia, an optical laryngeal organ motion analysis system, a respiratory motion analysis system for adults and a respiratory information collecting system for neonates in the New Energy and Industrial Technology Development Organization (NEDO) booth at the 42nd International Home Care & Rehabilitation Exhibition, H.C.R. 2015 (October 7~8 to be held at Tokyo Big Sight)

2015.9.8 "Highlighting Japan", a public relations magazine for overseas of the cabinet office of the Japanese government posted an article in the July issue to introduce Ideaquest.

2015.9.8 We will exhibit our optical laryngeal organ motion analysis system at the 21st Japanese Society of Dysphagia Rehabilitation Conference to be held on September 11th and 12th at Kyoto International Conference Center.